This is a terrific issue of ANS that you will not want to miss!  The Table of Contents is on the ANS web site, where you can go directly to details about each article.  This issue 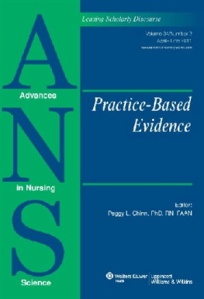 focuses on the topic “Practice-Based Evidence” but also features commentaries about two previously published articles that raised quite a bit of reader response!  These commentaries are available as free downloads in the “Featured Articles” section of the Home Page.

Here is some background on the commentaries.  The article by David Keepnews titled Lesbian, Gay, Bisexual, and Transgender Health Issues and Nursing: Moving Toward an Agenda is a thoughtful response to the article published last fall in ANS 33:3.  That article, titled Nursing’s Silence on Lesbian, Gay, Bisexual, and Transgender Issues: The Need for Emancipatory Efforts is based on an analysis by Eliason, Dibble and DeJoseph examining content in nurse journals with high impact-factor scores.  Their analysis revealed a lack of content that addresses any of the urgent needs of sexual and gender minorities in nursing’s most frequently cited literature.  Keepnews acknowledges this lack, but discusses evidence of nursing’s organizational and political work around LBGT health and the need for greater awareness, better and more research, and more organizational priorities for action in this area.

There are also three commentaries in this issue in a “Perspectives” section of this issue.  These three commentaries address issues around militarization and how this affects knowledge development and education.  These perspectives address issues that were first generated by the article by Perron, Rudge, Blais and Holmes titled The Politics of Nursing Knowledge and Education: Critical Pedagogy in the Face of the Militarization of Nursing in the War on Terror.  The article drew criticism from two nurse educators who take a very different view of the issues, as well as criticism of ANS editorial policies in publishing the article.  The ANS Advisory Board reviewed the issues involved during our annual meeting in November, 2010, and decided to request additional review of the article and the letters in order to encourage careful consideration further discussion of the important issues that surfaced.

The kind of discussion that these commentaries represent is precisely what underpins the purposes and history of ANS.  We are hopeful that as a reader you will use this blog to add to the discussion, and to contribute your thoughts and ideas on these and many other ideas and perspectives that are published in the pages of the journal.  Leave your comments here!  We look forward to hearing from you!

Tags: Advances in Nursing Science, ANS, EBP, Evidence based practice, practice based evidence
From: Journal Information, Journal News
← Nurse scholars shape the future – funding opportunities pending
ANS online and on paper: is there a difference? →
One Comment Post a comment