Translating Research to Reach for Peace

I am delighted to feature this article to introduce the current ANS issue focusing on “Health and Peace.”  The article, authored by Patricia Liehr, PhD, RN; Kate Morris, BA, MA; Mary Ann Leavitt, RN, BSN, CCRN and Ryutaro Takahashi, MD, PhD is titled “Translating Research Findings to Promote Peace: Moving From ‘Field to Forum’ With Verbatim Theatre.”  The background on this research, and the development of the theater play, is a fascinating story that Dr. Liehr has generously shared with us here:

Our manuscript, entitled “Translating research finding to promote peace: Moving from “field to forum” with verbatim theatre” began years ago when I began working with Japanese researchers. The research side of this story has merged with the creative arts side of the story to present With Their Voices Raised, which was first performed in November 2012. The Playwright/Dramaturg note and the Researcher note were in the program for the inaugural performances in 2012. They are included here to provide a context for understanding the origins of the manuscript.

The performance that we will watch tonight has its roots in research that began nearly two decades ago when Japanese and American researchers were studying blood pressure changes while talking to Japanese elders who had suffered a stroke. Our study purpose was to understand how the pathophysiology of stroke affected blood pressure recorded during talking. We asked our research participants to talk for four minute about their health; how they were managing the limitations imposed by their stroke…while we recorded blood pressure every two minutes.

Our participants took us down an unexpected path. The stories they shared while speaking wove in how they survived World War II, with the implicit and sometimes explicit suggestion that surviving a stroke was “nothing” compared to their World War II experience. As the research team considered what we were hearing, we decided that we needed to know more about surviving WWII for both Japanese and American elders. The bombings of Pearl Harbor and Hiroshima were selected as points of comparison, where each participant would be called upon to recollect aggressive actions taken by the opposing country.

About the same time the research was launched, we knew that we wanted to share these findings in ways other than traditional scholarly venues, like scientific journals. We wanted to touch people who may never read a scientific journal; wanted to reach youth who may be experiencing aggression in their own lives. We have published our research findings in a scholarly journal. Now….tonight, you are joining our journey as With Their Voices Raised shares the wisdom of our participants through documentary theatre. With your guidance, we will move on to share this wisdom with young people. We thank you for being here.

When I was first approached in the spring of 2010 by American and Japanese nursing researchers to develop a theatre presentation based on approximately fifty Pearl Harbor and Hiroshima survivor testimonies, I had only a general 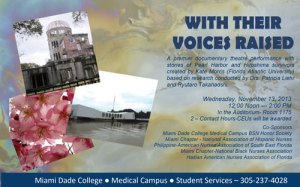 understanding of the events leading to United States involvement in World War II. My knowledge of the Pacific theater was based upon a recollection of a grainy photograph in my American History high-school text book of the U.S. Arizona engulfed in smoke and flames at Pearl Harbor on Dec 7, 1941. I had also read Hiroshima by John Hersey, but had no connection with the term hibakusha. I had a lot to learn.

In the winter of 2011 I traveled to Hiroshima, Japan and had my picture taken underneath the Memorial Monument for Hiroshima. Inside the Peace Museum I noticed a pocket watch, forever stopped at 8:15, tattered swatches of blackened clothing, and tiny pieces of concrete that were once buildings and homes. I watched video footage of the atomic bomb, its mushroom cloud of ash and debris rising high into the morning sky. I saw archaic clips of bald hibakusha, their faces covered with red dots, their teeth black and decaying. Finally, I signed the visitor’s book, along with countless others, in a pledge and plea for peace throughout the world.

In the spring of 2012 I visited Oahu, Hawaii. I climbed the steps of the control tower at the Pacific Aviation Museum on Ford Island and listened to the silence of the salt air. I rode a ferry over to the USS Arizona and saw the oil-slick ‘tears’ on top of the water while the ship’s turrets remained below. I took the “Home of the Brave” bus tour and drove past the countless headstones at Punchbowl National Cemetery, all decorated with an American flag. Finally, I signed the visitor’s book, along with countless others, thanking our brave servicemen and women for their sacrifice and service to our country.

Needless to say, working with the Pearl Harbor and Hiroshima survivors’ stories opened up a whole new path to my studies and the way I viewed the world. It also introduced me to documentary or verbatim theatre as a way to disseminate history and perpetuate research outside the textbook and classroom. By presenting With Their Voices Raised it is my hope that together we may learn by listening, by sharing, and by thoughtfully exploring our cultural differences and similarities in the hopes of a more peaceful future for us all. With that thought in mind, I welcome any comments or questions you may have in the talk-back following the performance and written in the survey.

Where do we go from here?

With Their Voices Raised will be performed in Miami on November 13, 2013.  The announcement for the performance has been included above in this blog message, as has a photo from the Florida Atlantic University performance (11-11-2012), capturing a

Hibakusha – A-bomb survivor. One who was subjected/exposed to the bomb/radiation.

Our next efforts will be directed to taking the script to high school students who will assume the roles of the 8 actors, perform the play, and engage with classmates in a discussion of the meaning of living through aggression. With this research-based creative experience, young people will have a history lesson as well as a lesson about the human spirit that calls for peace.

To download your copy of this article while it is featured, visit our ANS web site now!  Watch the video clip here!

This just-released issue of ANS focuses on the topic of  “Peace and Health.” I believe that nursing can significantly influence conditions the

promote peace. In fact to reach for an ideal of  high-level wellness and health for all, understanding and creating peace is an absolute necessity. The articles in this issue of ANS stand as a signal that within the nursing community, this potential does exist. Nursing

scholarship and research contributes to understanding relationships between peace and health, and evidence that can be used to build family-wide, community-wide, nation-wide and even world-wide possibilities for peace. I hope that as a reader you will be inspired to join these authors, and many others in the nursing community to build a science, and a practice, that promotes peace!