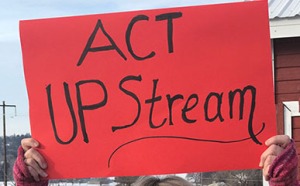 In the next few days, the first issue of the 40th volume of ANS will be published.  This issue will feature articles submitted in response to the issue topic “ANS Retrospective.” The first article we are featuring is authored by Patricia G. Butterfield, PhD, RN, FAAN, titled “Thinking Upstream: A 25-Year Retrospective and Conceptual Model Aimed at Reducing Health Inequities.”  Dr. Butterfield’s message for this blog affirms the commitment established from the founding of the journal – to publish cutting-edge scholarship that challenges the status quo and brings to the forefront issues that call forth critical examination and discussion. The timing of this 40th anniversary volume, remarkably, occurs concurrently with a new political climate in the U.S. that has prompted large-scale citizen action based on fundamental values. I am deeply grateful to Dr. Butterfield, and to a host of other ANS authors, who have contributed to shaping the very nature of this journal, and continue to do so as we embark on another decade!  Her article is currently available “Published Ahead-of-Print;” once the forthcoming issue is published the article will be featured. Watch for the announcement of the release of this issue, and return to the ANS website where the article will be available for download at no cost. Here is Dr. Butterfield’s message:

ANS was quite influential in my professional formation as a scholar and thinker.  As a doctoral student, I would go to the library, sneak my coffee into my book bag, seek out the newest issue of ANS, and find just the right hiding place (typically a carrel in the old stacks) to read.  What a treat it was.  Even the colors of the ANS jacket (green/blue) seemed right to me.  It wasn’t until many years later that I understood what drew me so much to the journal.  It wasn’t always the topics that drew me in; rather it was the journal’s sense of courage.  The fierceness of the articles.  The way ANS

authors dissected the subtext of a health problem, striking clearly and powerfully at the essence of an issue.  Poverty, marginalization, and social justice were (and are) key themes in ANS.  That’s why, many years ago, when it came time to submit my Thinking Upstream manuscript for publication consideration, ANS was my only real choice.  Since 1990 (when Upstream was published) the world…and the journal…has changed.  Health reforms (of lack thereof) have come and gone, but through the years and decades, ANS has retained its voice…and its sense of courage.

I’m reminded of how ANS made me feel as well as how it made me think because of the courage I have witnessed in recent days.  Courage, in the form of peaceful assembly, social commentary, and religious- and secular-based grassroots organizing, is a hallmark of our national identity. Whether it was the Women’s March on Washington, the spontaneous assembly of citizens in response to the president’s Executive Order addressing immigration, or scientists’ push back in response to attempts to remove climate change materials from the EPA website, I have seen courage. Many of the voices are coming from our new generations, bringing forth a level of candor and courage that our nation has not seen for many years.

This coming issue of ANS will feature a new paper I wrote…a 25-year retrospective on Thinking Upstream.  The key tenets of the new paper are the same as the original manuscript….that no matter how much money and talent we invest, our nation will not become healthy until we act upstream to address the roots of health.  We have surpassed the limits of what healthcare alone can do; saving lives requires our willingness to dig into the real issues that tap human potential.  This is a time for upstream courage and upstream action.  And from what I have seen the past few weeks, there is plenty of it to go around.