Promises of Peace and Development

In this current “Editor’s Pick” article titled “Promises of Peace and Development: Mining and Violence in Guatemala” the authors, C. Susana Caxaj, PhD, BScN; Helene Berman, PhD;, Jean-Paul Restoule, PhD; Colleen Varcoe, PhD and Susan L. Ray, PhD, tell a compelling story of the lives of people struggling for peace against great odds.  And, they connect this story to the lives of you and me – to all nurses who live and work in relatively privileged contexts who can, and must, be guided by a sense of responsibility to ensure human and environmental health in our quest for global peace and health.  Dr. Caxaj, who is a native Guatemalan, has shared this message about here work, with additional background about the challenges before us as nurses: 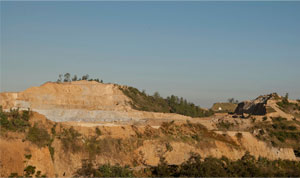 The Marlin mine involves deforestation, open-pit cyanide leaching and underground mining in extracting gold and silver. The mine has been linked to changes in water quality and quantity in the region. Photo: Allan Lissner

In “Promises of Peace and Development,” I wanted to contemplate peace in its elusive, aspirational and distant sense. For countries and regions throughout the world, scarred with a history of militarized violence and genocide, peace is only known in its absence, received as an empty gesture, and known as a broken promise. Indeed for many Guatemalans, myself included, the Peace Accords of 1996, which marked the formal end of a 36 year civil war, more aptly known as a genocide that targeted the diverse Mayan Indigenous peoples of Guatemala, has simply marked a transition towards a new type of violence and impunity. In May of last year, Rios Montt, a military dictator during the worst years of violence, was convicted of genocide. Yet less than 2 weeks after the verdict, the case was overturned. For many, this has been a source of further disillusionment. In writing this paper however, I did not wish to simply surrender to cynicism, instead, I wanted to document the conditions amenable to peace, and in contrast, activities or practices, sometimes called “development,” that must be signaled, as mechanisms of conflict, war and insecurity.

When I think of the word peace, I often think of the expression “no justice, no peace.” My work with the community of San Miguel Ixtahuacán certainly reflects this reality.  Over years of getting to know community members and the months at a time that I have spent living among them, I have seen first-hand the profound inequities and injustices that shape local

In July 2011, the Peoples International Health Tribunal was carried out in San Miguel Ixtahuacán. The tribunal included testimonies from mining-affected communities in Mexico, Guatemala and Honduras affected by Goldcorp’s marlin mine.

residents’ experiences. The presence of Goldcorp’s Marlin Mine, by exacerbating inequities, has brought new challenges and conflicts to the region. By failing to represent or recognize the community’s wishes and vision for development, this large-scale project has continued a legacy of social exclusion and colonialism.

As nurses we know that these political contexts ultimately impact the health of communities. As I write this, I have another manuscript open where I have started to write about the many mental health challenges that community members have reported. It is heartbreaking to know the degree of suffering that so many residents in this community have endured. My hope is that in reading this paper, more nurse scholars and health researchers generally will incorporate a critique of mainstream notions of development as central to a global health equity mandate. And further, that they will champion Indigenous rights and self-determination as key components of an upstream health promotion approach.

Nurse researchers have a lot to learn from Indigenous communities who are often the first to be negatively impacted by these large-scale projects. We must recognize their knowledge and experience if we are to work towards healthier societies. We must also develop creative ways to marry this knowledge with our scholarship if we are to build solutions that are equitable, sustainable and culturally relevant. Arising from this research, community members were able to partner with regional, national and international organizations as well as other mining-affected communities to develop the first ever Peoples International Health Tribunal. This tribunal, a social forum or ‘popular trial,’ was held in the municipality on July 14th and 15th of 2011. There, in front of a panel of International judges – including internationally renown journalists, environmentalists, lawyers, and others, including the former advisor to the World Bank, community members gave testimonios or testimonies, denouncing the mining company and detailing the harms that they had suffered. The international panel of judges found Goldcorp guilty of violations to the communities’ environment, health and human rights. Certainly this is but a humble step towards justice, but all in all, we must continue to work with communities negatively impacted by large-scale projects to pursue justice, and ultimately, towards a healthier and more peaceful society.

To download your free copy of this article, visit the ANS Web Site now!  It is available at no charge while the article is being featured.